I had two elderly dining room chairs that had seen better days so signed up for an upholstery evening class to learn how to fix them. Two drop in seats didn’t take long even for a beginner. I needed a new project and asked around my friends for anything that might be suitable. My partner at LocalwebsUK offered a boudoir /nursing chair that she had started to recover many years ago. I gratefully accepted.The chair arrived with a few problems! I didn’t immediately notice that the decorative detail under the right hand arm had half missing either. 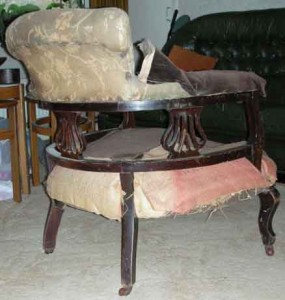 It had a saggy bottom and  there had been a few previous re-coverings over the years; 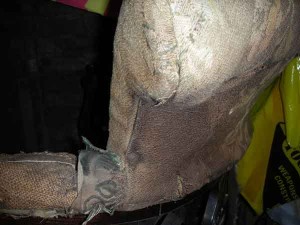 I had to strip it down to the basic structure before doing anything.  Here we see it almost bare. The official description of the seat is ‘sprung overstuffed’ which in simple terms seems to mean springs with stuffing on top! The starting point is a lattice of webbing, tensioned and interlaced onto which the 4 springs are attached. The springs are then ‘tied down’. The whole is then covered with hessian and the tops of the springs are sewn in to stop them moving. The stuffing proper starts. The original was stuffed with horse hair and straw. 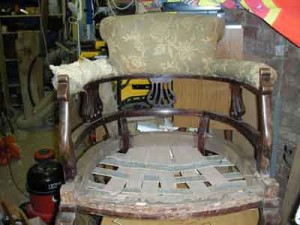 Above we see the broken detail on the right side together with the arm stuffing arrangement. Beneath the hessian the stuffing was straw held into place with long nails. 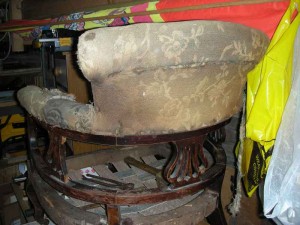 There have been at least two earlier upholstery layers without counting the part finished one I inherited. Extensive ‘tack’ damage to the supporting wood is also visible. This level of ‘damage’ is prevalent on all the support components of the structure. The holes were filled with a combination of glue and sawdust worked into the areas. It seems to work.

Once the hessian top cover was removed from the arms a cotton waste type material was revealed, beneath that, straw.

The back was also stuffed with straw, both back and front. 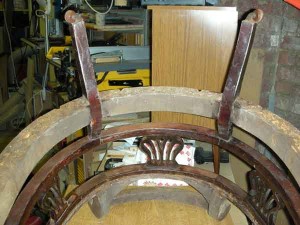 The chair is now stripped to the basic structure. In this upside down photo the tack damage to the structural wood and the general damage to the show wood is visible. The broken detail is on the left hand side of the photograph.

The construction of the chair appears to have been an assembly of three units and the final assembly being designed to borrow strength from the combination. Clearly a major advantage however many of the joints were loose so a large degree of dis-assembly was required.