The Veteran Car run. Now you mustn’t call it the Old Crock’s race! For a start they are not ‘old crocks’ nor is it a race! The Daily Sketch promoted it as ‘the Old Crock’s Race’ in 1927 but they were a red bannered tabloid!

This annual event takes place on the 1st Sunday of November. To commemorate the Emancipation Run of 1896. On that run over 30 pioneer motorists set off for the seaside to celebrate the ‘doing away with the red flag’. Or that is the popular belief. 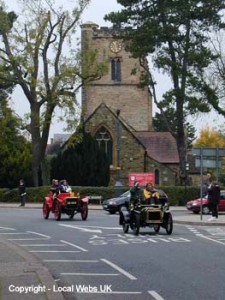 The reality is a bit more complicated. Way back in 1801 Richard Trevithick demonstrated the practicality of a steam driven vehicle. Later in the century W.H. Church, Walter Hancock and Goldsworthy Gurney used steam to power their steam driven road coaches.

One, built by Hancock, had a speed of between 15 & 20 mph and between August and November 1834 carried over 400 passengers between the City and Paddington, in London.

The main problem, at that time, was that the bulk of Britain’s main roads were owned by turnpike trusts. They didn’t like the heavy steam vehicles and charged excessive tolls. The steam road coaches soon disappeared. By 1840 there were no steam motor coaches on the British roads. 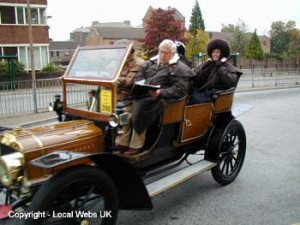 Next came the self-propelled steam traction engine. Most of these were used for agriculture and only used the roads infrequently. The Locomotive Act of 1861 reduced the tolls but introduced a top speed of 10mph or 5mph in towns. It further required the engine to have a crew of 2.


The ‘Red Flag Act’ of 1865 is the Act that caused the problems. Section 3 required that the locomotive should have 3 persons employed and that 1 such person should precede the locomotive, on foot, by not less than 60 yards and shall carry a small red flag constantly displayed and shall warn drivers and riders of horses of such locomotives.


This Act reduced the speed to 4mph or 2mph in towns. While clauses in the Act may make sense to the predominately equestrian traffic it made no distinction between heavy and light locomotives. It was this factor that stifled the development of the light locomotive or motor car, in Britain.


In 1873 Parliament set up a committee to look at the Acts and it decided that on congested roads a man, 60 yards ahead gave little warning as he could be lost in ‘traffic’.  Ironically the flapping red flag was claimed to frighten the horses. The Highway & Locomotive Act Amendment of 1878 sorted out some of these problems.


The man now had to walk 20 yards ahead. There was no mention of him carrying a red flag! However it was now necessary for every locomotive to have a £10 licence for each county that the locomotive passed through.
Some counties stipulated the hours at which the locomotive could travel. Just to put it in perspective, the first international flight from Gatwick to Paris cost about £5.00 and that was in the 1930’s!


The Locomotive on the Highway Act was passed in 1896. It did away with the need to have 3 people in attendance or for a man to walk in front.
It raised the maximum speed to a heady 14 mph although most local government boards had the power to reduce it to 12mph!


In November of that year the Emancipation Run, organised by The Motor Car Club, took place.
By all accounts it was a bit of a shambles with hidden agendas and more than a little cheating taking precedence over the stated reason for the run.
See ‘http://www.brooklands.org.uk/stories/TIMES.HTM’ for more detail.


In Reigate a small girl ran out in front of one of the leading cars and was knocked over, only to be hit by a passing cyclist as she picked herself up! Poor kid!
A Panhard Levassor, driven by M. Mayade, who also won the 1896 Paris – Marseilles race in the same vehicle took part. M. Mavade also has the distinction of becoming the first person killed in a motor racing accident.

The Motor Car Club continued to organise the run until 1902. It did not go to Brighton each year but to various places that enabled a return trip on the same day. A big event was planned for the 10th Anniversary but this ended up as a luncheon.

The event lay dormant as a motoring spectacle until 1927 when the motoring editor of The Daily Sketch had the idea of re-enacting the Emancipation Run. He enlisted the help of the Sunday Graphic (possibly a Sunday sister paper) and the two papers organised the run for 1927. In 1928 The Autocar magazine also helped with the sponsorship but in 1929 it was back to the two papers.

The Royal Automobile Club took over proper, professional, organisation in 1930 and continue to make an excellent job of it to this day.


In 1952 the date was fixed for the 1st Sunday in November. In that year the Rank organisation made the classic film ‘Genevieve’ and used the 1952 run to take many establishing shots. My father was an extra at the Crawley railway crossing.


Try as I might I have not been able to see him in the film! BUT if you see a handsome fella in his early thirties that looks as if he could have sired a good looking guy like wot I am <G> that’ll be my Dad! 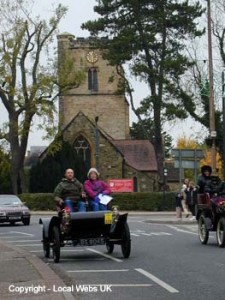