Maybe adventures is not the best title at the moment. Maybe misadventures would be more to the point ?

We went off to France, the Alps then to the coast. It was not a restful holiday although the scenery was beautiful.  The 12v supply to the fridge packed up which made it difficult to plan our journey as we needed to use a campsite each night to have mains electricity for the fridge. We usually use aires during the trip then finish in a campsite to unwind. The brakes juddered on the steeper alpine descents which rather spoiled the pleasure of driving through the mountains.

And to cap it all I reversed into a concrete bollard. Bollard one rear of Motorhome nil! It is customary to blame someone or something else when an accident occurs and I don’t see any reason why I should be different. The problem is that there was nobody else within yards, except my wife and as she was in the passenger seat any blame would not stand up in a court, kangaroo or otherwise. Then I had an inspiration!

A few weeks before our trip we went to the Newbury Motorhome show. We were looking for a few items although I don’t think we actually found them. We did pick up a few things we didn’t really need but that is what shows are for, isn’t it? I also picked up a flyer for bodywork repairs on the basis that I hadn’t ever actually damaged any real bodywork but. . . .

There, I had it! My excuse! The bollard was clearly an undercover agent cleverly disguised as a bollard and in the pay of Spitfire Garage of Spitfire Quay, Hazel Road, Southampton, SO19 7GB. It just leapt out behind me, yer honour!

i ‘phoned them as soon as we had run the gauntlet at Calais and got home safely. Send us some photos showing the damage as best you can and we’ll try to give you an estimate! Neat, that saved a long ‘ish drive. I took about a dozen photos including a shot of a badly patched spot above the LPG locker. A quote came back very quickly with the caveat that it might be necessary to adjust it once it was inspected in real time.

That was known at the outset so I had taken particular care with the photos. In the event the cost was as quoted. The delivery was when stated and the quality was excellent!

Now I know that they will understand when I say that I hope I won’t ever see them again however in the event that I do I shall have no qualms about taking it to Spitfire garage for repair despite a round trip of about 170 miles. For what it is worth I have no hesitation in suggesting that should you be unfortunate enough to require repairs to your Motorhome bodywork that you ask Spitfire garage to give you a quote.

As I have said I don’t plan on needing their skills again so this comment on the quality of their work is offered entirely FOC.

Prior to taking my vehicle down to Spitfire I had a further long planned trip to France to watch some stages of the Tour de France. The plan was to follow the race from the cobbles of the Northern Classics to Vannes but the best laid plans…..

I arrived at my chosen point on the cobbled section on the Sunday and parked along with the other early arrivals. That was the first mistake. Having unshipped and assembled my bike I set off to explore the general area.

I noticed that there were two odd patches each the size of a couple of tennis courts, in the cropped fields opposite. One at the beginning of the section and another towards the end, just by the very sharp bend. At that bend there was already a large group of camping-cars parked and waiting. I, and it seems the others, did not realise the significance of the patches in the crops. One Dutch fan had even used the access slope to reach a little hidy-hole in the bushes adjacent to the patch. I endured three days of mini dust storms each time a local hurtled down the cobbles from one village to another. They may have been cobbled lanes but they certainly carried a fair amount of local traffic each day!

On race day I awoke to the sound of heavy traffic 2 feet from my window. I emerged, bleary eyed to discover my 2nd mistake of the trip. The cropped areas had been cleared, by the farmer, to accomodate the spectators vehicles! A perfect position, higher than the road and on the up-wind side.  Whilst they had a really good, clear view in prospect I was getting choked with dust. Ho hum, you live and learn…. 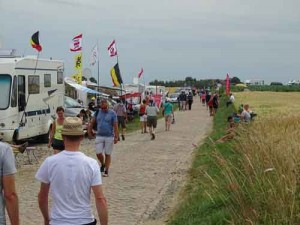 Come the actual race I stood on the bank and got a good shot of ‘G’ (Geraint Thomas) sheparding ‘Froo Me’ (Chris Froome) in Yellow with full yellow helmet, at the front of the peloton. 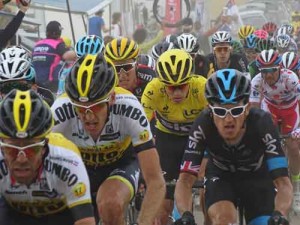 So it was worth the trip!